January 25, 2021 – The Book Woman of Troublesome Creek by Kim Richardson

“…a hauntingly atmospheric love letter to the first mobile library in Kentucky and the fierce, brave packhorse librarians who wove their way from shack to shack dispensing literacy, hope, and — just as importantly — a compassionate human connection.”—Sara Gruen, author of Water for Elephants

The hardscrabble folks of Troublesome Creek have to scrap for everything—everything except books, that is. Thanks to Roosevelt’s Kentucky Pack Horse Library Project, Troublesome’s got its very own traveling librarian, Cussy Mary Carter.

Cussy’s not only a book woman, however, she’s also the last of her kind, her skin a shade of blue unlike most anyone else. Not everyone is keen on Cussy’s family or the Library Project, and a Blue is often blamed for any whiff of trouble. If Cussy wants to bring the joy of books to the hill folks, she’s going to have to confront prejudice as old as the Appalachias and suspicion as deep as the holler.

Inspired by the true blue-skinned people of Kentucky and the brave and dedicated Kentucky Pack Horse library service of the 1930s, The Book Woman of Troublesome Creek is a story of raw courage, fierce strength, and one woman’s belief that books can carry us anywhere—even back home. 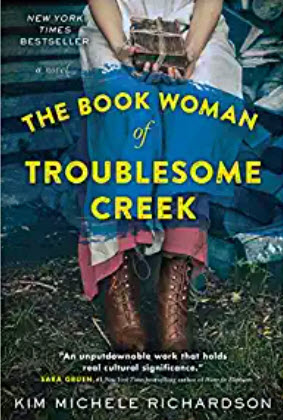 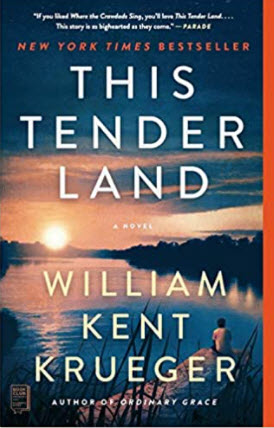 In the summer of 1932, on the banks of Minnesota’s Gilead River, Odie O’Banion is an orphan confined to the Lincoln Indian Training School, a pitiless place where his lively nature earns him the superintendent’s wrath. Forced to flee after committing a terrible crime, he and his brother, Albert, their best friend, Mose, and a brokenhearted little girl named Emmy steal away in a canoe, heading for the mighty Mississippi and a place to call their own.

Over the course of one summer, these four orphans journey into the unknown and cross paths with others who are adrift, from struggling farmers and traveling faith healers to displaced families and lost souls of all kinds. With the feel of a modern classic, This Tender Land is an enthralling, big-hearted epic that shows how the magnificent American landscape connects us all, haunts our dreams, and makes us whole.

Lydia Quixano Pérez lives in the Mexican city of Acapulco. She runs a bookstore. She has a son, Luca, the love of her life, and a wonderful husband who is a journalist. And while there are cracks beginning to show in Acapulco because of the drug cartels, her life is, by and large, fairly comfortable.

Even though she knows they’ll never sell, Lydia stocks some of her all-time favorite books in her store. And then one day a man enters the shop to browse and comes up to the register with a few books he would like to buy―two of them her favorites. Javier is erudite. He is charming. And, unbeknownst to Lydia, he is the jefe of the newest drug cartel that has gruesomely taken over the city. When Lydia’s husband’s tell-all profile of Javier is published, none of their lives will ever be the same.

Forced to flee, Lydia and eight-year-old Luca soon find themselves miles and worlds away from their comfortable middle-class existence. Instantly transformed into migrants, Lydia and Luca ride la bestia―trains that make their way north toward the United States, which is the only place Javier’s reach doesn’t extend. As they join the countless people trying to reach el norte, Lydia soon sees that everyone is running from something. But what exactly are they running to? 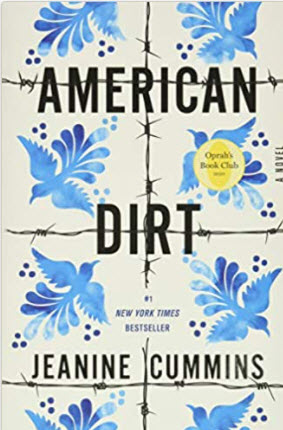 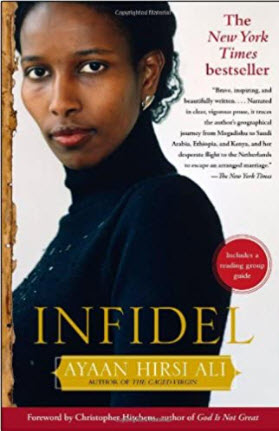 Infidel shows the coming of age of this distinguished political superstar and champion of free speech as well as the development of her beliefs, iron will, and extraordinary determination to fight injustice. Raised in a strict Muslim family, Hirsi Ali survived civil war, female mutilation, brutal beatings, adolescence as a devout believer during the rise of the Muslim Brotherhood, and life in four troubled, unstable countries ruled largely by despots. She escaped from a forced marriage and sought asylum in the Netherlands, where she earned a college degree in political science, tried to help her tragically depressed sister adjust to the West, and fought for the rights of Muslim women and the reform of Islam as a member of Parliament. Under constant threat, demonized by reactionary Islamists and politicians, disowned by her father, and expelled from family and clan, she refuses to be silenced.

Ultimately a celebration of triumph over adversity, Hirsi Ali’s story tells how a bright little girl evolves out of dutiful obedience to become an outspoken, pioneering freedom fighter. As Western governments struggle to balance democratic ideals with religious pressures, no other book could be more timely or more significant.Meg Taylor – reviewer

May 25, 2020 – Ribbons of Scarlet by Stephanie Dray and Laura Kamoi

Ribbons of Scarlet is a timely story of the power of women to start a revolution—and change the world.

In late eighteenth-century France, women do not have a place in politics. But as the tide of revolution rises, women from gilded salons to the streets of Paris decide otherwise—upending a world order that has long oppressed them.

Blue-blooded Sophie de Grouchy believes in democracy, education, and equal rights for women, and marries the only man in Paris who agrees. Emboldened to fight the injustices of King Louis XVI, Sophie aims to prove that an educated populace can govern itself–but one of her students, fruit-seller Louise Audu, is hungrier for bread and vengeance than learning. When the Bastille falls and Louise leads a women’s march to Versailles, the monarchy is forced to bend, but not without a fight. The king’s pious sister Princess Elisabeth takes a stand to defend her brother, spirit her family to safety, and restore the old order, even at the risk of her head.

But when fanatics use the newspapers to twist the revolution’s ideals into a new tyranny, even the women who toppled the monarchy are threatened by the guillotine. Putting her faith in the pen, brilliant political wife Manon Roland tries to write a way out of France’s blood-soaked Reign of Terror while pike-bearing Pauline Leon and steely Charlotte Corday embrace violence as the only way to save the nation. With justice corrupted by revenge, all the women must make impossible choices to survive–unless unlikely heroine and courtesan’s daughter Emilie de Sainte-Amaranthe can sway the man who controls France’s fate: the fearsome Robespierre. 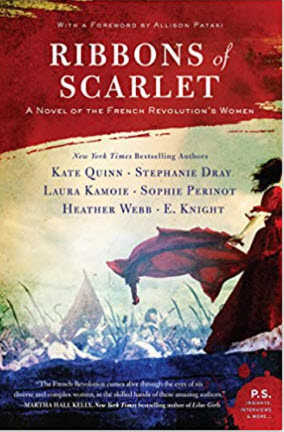 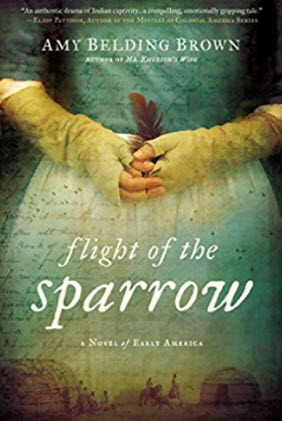 Massachusetts Bay Colony, 1676. Even before Mary Rowlandson was captured by Indians on a winter day of violence and terror, she sometimes found herself in conflict with her rigid Puritan community. Now, her home destroyed, her children lost to her, she has been sold into the service of a powerful woman tribal leader, made a pawn in the ongoing bloody struggle between English settlers and native people.

Battling cold, hunger, and exhaustion, Mary witnesses harrowing brutality but also unexpected kindness. To her confused surprise, she is drawn to her captors’ open and straightforward way of life, a feeling further complicated by her attraction to a generous, protective English-speaking native known as James Printer. All her life, Mary has been taught to fear God, submit to her husband, and abhor Indians. Now, having lived on the other side of the forest, she begins to question the edicts that have guided her, torn between the life she knew and the wisdom the natives have shown her.

Based on the compelling true narrative of Mary Rowlandson, Flight of the Sparrow is an evocative tale that transports the reader to a little-known time in early America and explores the real meanings of freedom, faith, and acceptance.

As part of the Treaty of Paris, in which Great Britain recognized the new United States of America, Britain ceded the land that comprised the immense Northwest Territory, a wilderness empire northwest of the Ohio River containing the future states of Ohio, Indiana, Illinois, Michigan, and Wisconsin. A Massachusetts minister named Manasseh Cutler was instrumental in opening this vast territory to veterans of the Revolutionary War and their families for settlement. Included in the Northwest Ordinance were three remarkable conditions: freedom of religion, free universal education, and most importantly, the prohibition of slavery. In 1788 the first band of pioneers set out from New England for the Northwest Territory under the leadership of Revolutionary War veteran General Rufus Putnam. They settled in what is now Marietta on the banks of the Ohio River.

McCullough tells the story through five major characters: Cutler and Putnam; Cutler’s son Ephraim; and two other men, one a carpenter turned architect, and the other a physician who became a prominent pioneer in American science. “With clarity and incisiveness, [McCullough] details the experience of a brave and broad-minded band of people who crossed raging rivers, chopped down forests, plowed miles of land, suffered incalculable hardships, and braved a lonely frontier to forge a new American ideal” (The Providence Journal).

Drawn in great part from a rare and all-but-unknown collection of diaries and letters by the key figures, The Pioneers is a uniquely American story of people whose ambition and courage led them to remarkable accomplishments. “A tale of uplift” (The New York Times Book Review), this is a quintessentially American story, written with David McCullough’s signature narrative energy. 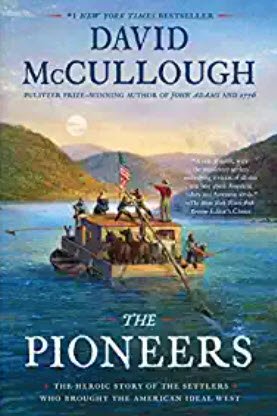 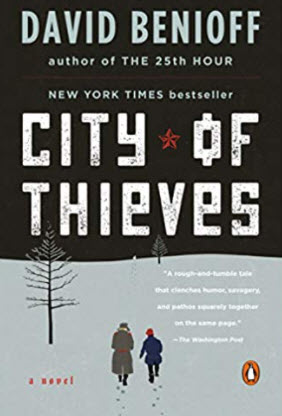 During the Nazis’ brutal siege of Leningrad, Lev Beniov is arrested for looting and thrown into the same cell as a handsome deserter named Kolya. Instead of being executed, Lev and Kolya are given a shot at saving their own lives by complying with an outrageous directive: secure a dozen eggs for a powerful Soviet colonel to use in his daughter’s wedding cake. In a city cut off from all supplies and suffering unbelievable deprivation, Lev and Kolya embark on a hunt through the dire lawlessness of Leningrad and behind enemy lines to find the impossible.

By turns insightful and funny, thrilling and terrifying, the New York Times bestseller City of Thieves is a gripping, cinematic World War II adventure and an intimate coming-of-age story with an utterly contemporary feel for how boys become men.Reviewer – TBA

In 1580’s England, during the Black Plague a young Latin tutor falls in love with an extraordinary, eccentric young woman in this “exceptional historical novel” (The New Yorker) and best-selling winner of the Women’s Prize for Fiction.

Agnes is a wild creature who walks her family’s land with a falcon on her glove and is known throughout the countryside for her unusual gifts as a healer, understanding plants and potions better than she does people. Once she settles with her husband on Henley Street in Stratford-upon-Avon she becomes a fiercely protective mother and a steadfast, centrifugal force in the life of her young husband, whose career on the London stage is taking off when his beloved young son succumbs to sudden fever.

A luminous portrait of a marriage, a shattering evocation of a family ravaged by grief and loss, and a tender and unforgettable re-imagining of a boy whose life has been all but forgotten, and whose name was given to one of the most celebrated plays of all time, Hamnet is mesmerizing, seductive, impossible to put down—a magnificent leap forward from one of our most gifted novelists. 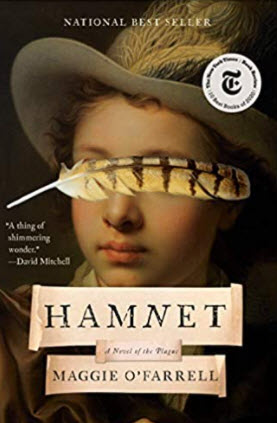 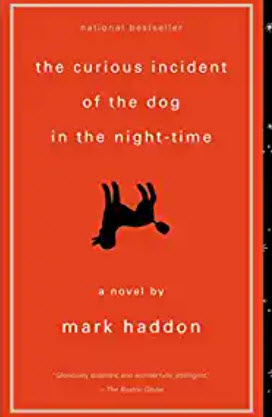 November 28, 2021 – The Curious Incident of the Dog in the Nighttime by mark Haddon

Christopher John Francis Boone knows all the countries of the world and their capitals and every prime number up to 7,057. He relates well to animals but has no understanding of human emotions. He cannot stand to be touched. And he detests the color yellow.

This improbable story of Christopher’s quest to investigate the suspicious death of a neighborhood dog makes for one of the most captivating, unusual, and widely heralded novels in recent years.