Alexa is getting the movies and discussions set for us.  Here is the list! Links to the movies will be available on this page as well.

Producer David Selznick, best known for Gone With the Wind, brought British director Alfred Hitchcock to America. They collaborated on 6 films including Rebecca until Hitchcock could no longer endure Selznick’s persistent meddling. Here’s the story!

Now you’ve been behind the scenes on this picture thanks to our previous week’s documentary, you can watch it again with a new point of view. It won Best Picture of 1940, and stars Laurence Olivier and Joan Fontaine. “Last night I dreamt I went to Manderley again…”.

In my humble opinion, Paul Newman gives his best screen performance as a washed-up lawyer in this courtroom drama. Directed by Sidney Lumet, and nominated for 5 Oscars including Newman, it boasts a great supporting cast: James Mason, Charlotte Rampling, Jack Warden and Lindsay Crouse.

Ginger Rogers and Fred Astaire collaborated on 10 pictures together, and this is number four. Irving Berlin wrote the score which includes Cheek to Cheek, Isn’t This a Lovely Day to Be Caught in the Rain?, and Top Hat, White Tie and Tails. And yes, this is the one in which Ginger wears that feathered dress which caused an uproar!

This is the first of four British produced pictures starring the wonderful Margaret Rutherford as Miss Marple. The ever meddling sleuth is convinced she has witnessed a murder on a train but cannot convince anyone she has. Agatha Christie was so fond of Rutherford that she later dedicated one of her mysteries to her.

Judy Garland, John Hodiak, and Angela Lansbury headline this Technicolor musical inspired by the real Harvey House restaurants. The movie won an Oscar for Best Music, Original Song for Harry Warren (music) and Johnny Mercer (lyrics) for the song “On the Atchison, Topeka and Santa Fe”.

Mickey Rooney deserved an Oscar for his performance in this wartime drama, but he didn’t get one. Author William Saroyan won an Oscar for the screenplay based on his novel. A wonderful MGM cast includes Frank Morgan, Marsha Hunt, Fay Bainter, Van Johnson and Donna Reed.

Irene Dunne and Cary Grant are reunited in this screwball comedy about a wife who has been lost at sea for seven years. Of course, she is rescued and arrives on her husband’s wedding day. Gail Patrick is perfection as the bride who wonders why her new husband keeps postponing the honeymoon. 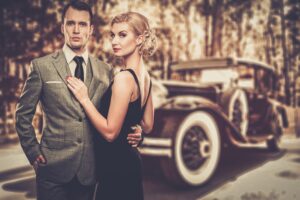 The Ragtime group has been working with their tablets for several years now, and they never want to miss a Zoom session.  We spend our time catching up with each other, but we also work on technology skills.  And of course, we also have some plain old fun with bingo, virtual museum tours and joke time.

This group of older adults is amazing and we thank all of the supporters, grants and organizations that have made this tablet group possible.